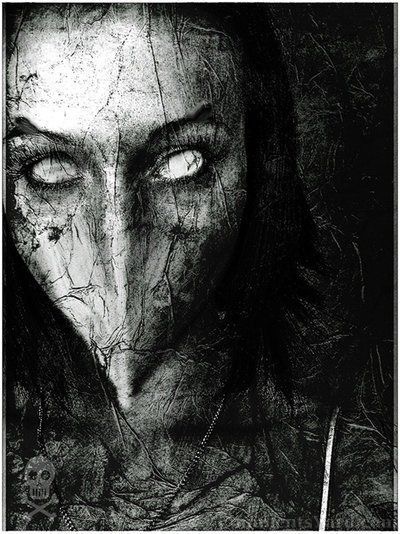 Her scars were calling to us, the odd beauty of the pain she carried drew us closer, whether we willed it or not. In the dim light, we could see her bending down to choose a tattered piece of this, a scrap of that, and periodically sit quietly for a short time and stitch it onto herself. With her own hand. She didn’t make a sound but the occasional tear would slide silently down her cheek to land on the piece she was stitching~and then she would smile to herself and stand, looking for the next torn piece of her that was relevant enough to sew back on.

You could tell she had been a great beauty at one time, by the world’s standards, but every piece of her was from a different heartbreak, and her destruction was evident in the face we saw now. She would look at us from time to time, and give a sweet little half smile, as if she knew something we didn’t. But when we dared to meet her eyes, they were a clear burning flame that left us in awe, and somehow ashamed.

The next time she sat to begin her stitching, with considerable nudging from my tribe I stepped closer to ask her a question. She looked up at me and raised an eyebrow bisected by a thin scar, questioning what I believed was my folly.

I met her eyes, and they broke my heart, but I held her gaze anyway as I spoke. I asked her how she came to be in such a patchwork state when she had obviously been a great beauty. I asked her if it hurt when she stitched those pieces of her back on, and how-I wondered-did she decide from all the torn and broken pieces, which ones were worthy of bringing back into herself.

She started slowly, and her voice was as torn as her appearance, but her eyes never wavered from mine, and the Truth bled through her every word. She told of a fractured foundation, a hopeless grasping of home, her longing to feel safe. She spoke of the slow and insidious death of her joy and spirit, the rejection of her heart, the silencing of her voice. She did not cast blame, saying only that she lost her clarity of soul~and when her fingertips no longer touched the others of the universe, she was lost.

She explained to me, in a voice that filled my heart with tears, how she sorted through every heartbreak to find the one piece, every time, that made her living worth the effort.

I was spellbound by her story of a love given, greater than any I had ever known, her infection of  ‘life-blindness’, and the loss of her power with the loss of her belief in anything that mattered. Every once in awhile, as she told her story, a tear would fall again, and in it I would see the sorrow in every single one of us reflected in its shine.

As she spoke to me, the others drew closer, unable to deny the pull of her soul made audible. She told us of battles won, and lost…the sorrows of love squandered…and her final, agonizing acceptance of her own power.

You could have heard a pin drop in the silence following her last words. She looked at each one of us, cauterizing our foolishness, and stopping our breath.

Then she stood, just as a single beam of light broke through, shining into the heart of her for the first time. She allowed herself to be filled with wonder, and we struggled to take the next breath…she glowed with an inner fire…

And we had never seen anyone more beautiful.