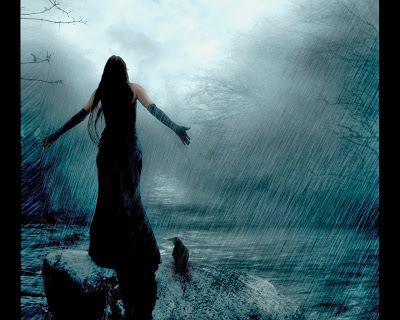 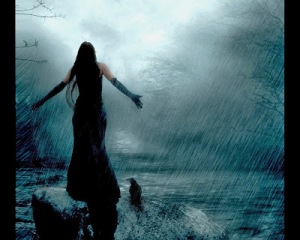 She stood before him in chains, bowed as if to protect herself from the words that struck like stones. She heard him dismiss the words she spoke, as easily as she had allowed herself to be brushed aside repeatedly over the years. Her heart shuddered as it fractured one last time before letting go.

As she stared at the floor, her eyes burned with fury at herself for the foolishness of all her decisions leading to this moment, and then she let that go too. She had permitted disrespect and neglect for so long that it felt odd and empowering to raise her head and smile into his eyes.

He was rendered mute by whatever it was he saw in her expression.

She straightened to her full height, topping him by two inches. She would never make herself smaller for anyone again. She stared directly at him, and he winced at the sorrow he finally saw there. She lifted her hands slowly and let everything that chained her to him fall away. He began to sweat, and shift away from her.

“I don’t belong here anymore,” she said. “Everything I needed to learn here is complete. There is nothing to forgive either of us for, we call to ourselves the lessons we need to learn, no matter how long and painful the teachings.”

He began to rage at her, afraid and helpless in the face of the woman he no longer recognized. He tried to sway her with guilt, with grief, with sympathy and with logic. He painted a dark and ugly picture, and the black clouds rolled in and lightning began to strike all around them. The earth shifted beneath their feet and he lost his balance, trying vainly to find something solid to stand upon.

But She remained still as the earth settled beneath her, and she lifted her face to the power of the storm coming.

Every move she made then, changed the landscape around her. The rain began to fall as the sky wept tears of joy for her. The thunder moved in her heart and shattered years of silence. The lightning continued to flash and illuminate everything she had always been too afraid to see. As he ran for shelter to the only life he had known, she threw her arms wide and laughed at the first real joy she had allowed herself in ages.

For the first time in forever, light began to show through the dry cracks in a heart that had atrophied. Hope, desire and dreams began to grow in profusion where there had long been nothing but dust. She finally looked at herself through her own eyes, instead of the eyes of another, and she no longer hated who she saw.

The darkness swirled with the light and the rain washed every bit of regret away, exposing the glitter of truth to reflect the lightning flashes. She looked out at all the possibilities she had hidden from herself, and they were more beautiful than any rainbow she had ever seen. She welcomed the fury of it all, the disruption, the remaking of the landscape around her.

She reveled in the storm that came from the very heart of her. She was the storm, and she destroyed all that was.

And she had never been happier.

2 thoughts on “The Storm of She”